HIS WILL MINISTRY  INT

Past articles from His Will Ministry staff and partners. 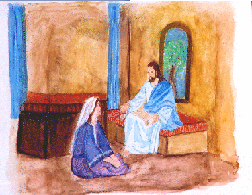 Praying Like Christ
By Director of His Will Ministry Herb Whitaker

To start, lets look at a key scripture that Christ gave us as an example.  Note: All of the scripture references used here are from the New King James.

1Now it came to pass, as He was praying in a certain place, when He ceased, that one of His disciples said to Him, "Lord, teach us to pray, as John also taught his disciples."
2So He said to them, "When you pray, say:

Our Father in heaven,
Hallowed be Your name.
Your kingdom come,
Your will be done
On earth as it is in heaven.
3Give us day by day our daily bread.
4And forgive us our sins,
For we also forgive everyone who is indebted to us.
And do not lead us into temptation,
But deliver us from the evil one."

5And He said to them," Which of you shall have a friend, and go to him at midnight and say to him, 'Friend, lend me three loaves; 6for a friend of mine has come to me on his journey, and I have nothing to set before him'; 7and he will answer from within and say, 'Do not trouble me; the door is now shut, and my children are with me in bed; I cannot rise and give to you'?  8I say to you, though he will not rise and give to him because he is his friend, yet because of his persistence he will rise and give him as many as he needs.
9"So I say to you, ask, and it will be given to you; seek, and you will find; knock, and it will be opened to you.  10For everyone who asks receives, and he who seeks finds, and to him who knocks it will be opened.  11If a son asks for bread from any father among you, will he give him a stone?  Or if he asks for a fish, will he give him a serpent instead of a fish?  12Or if he asks for an egg, will he offer him a scorpion?

The example I mentioned above specifically is (vv.2-4), and this is what many call the Lords prayer.  However this is not the Lords Prayer, it is the example Christ gave to his disciples in response to their request to teach them to pray.  It also is a teaching for Christians on how to pray and we will use it as our study guide.

2So He said to them, "When you pray, say: Our Father in heaven, Hallowed be Your name.  Your kingdom come, Your will be done On earth as it is in heaven.  3Give us day by day our daily bread, 4And forgive us our sins, For we also forgive everyone who is indebted to us, And do not lead us into temptation, But deliver us from the evil one."

"Our Father in heaven", identifies to whom we are praying and Christ uses Farther here because the disciples have earned their right to be called his brothers by accepting his teachings (the Good News).  As Christians who are born again, we also have this right, as we have become brothers and sisters in Christ.

"Hallowed be Your name", Shows reverence and exults him with respect.  We are not on an even plain with God and this shows the respect he is worthy of, and our acknowledgement that He is the Almighty God the Holiest of Holy the Creator of all things.

"Your kingdom come, Your will be done On earth as it is in heaven," Shows God that you share and honor His will.

"Give us day by day our daily bread", this is where we ask God to provide our daily needs.  In the Bible, "prayer" is used in a simpler and a more complex, a narrower and a wider signification.  In the former case it is supplication for benefits either for one's self or for others.  In the latter, it is an act of worship, which covers our soul in its approach to God.  Supplication is at the heart of it, for prayer always springs out of a sense of need and a belief that God is a rewarder of them that diligently seek Him (Heb 11:6 ).  However, adoration, confession, and thanksgiving also find a place, so that the suppliant becomes a worshipper.  It is unnecessary to distinguish all the various terms for prayer, which are employed in the Old Testament and the New Testament.  But the fact should be noticed that in the Hebrew and Greek there are on the one hand words for prayer that denote a direct petition or short, sharp cry of the heart in its distress (Ps 30:2; 2 Cor 12:8), and on the other "prayers" like that of Hannah (1 Sam 2:1-10), which is in reality a song of thanksgiving, or that of Paul, the prisoner of Jesus Christ, in which intercession is mingled with doxology (Eph 3:14-21)

"And forgive us our sins, For we also forgive everyone who is indebted to us", Here we can ask for forgiveness and expect to receive it if we have forgiven those who may have wronged us.

A surprising number of Christians never do develop a healthy prayer life.  To often, prayer is reduced to little more than a polite formality before meals, or a hasty word at the end of the day, or it becomes a last resort when we have nowhere else to turn.

This is quite a contrast to Christ.  His was a life of prayer.  His disciples took note of it and asked Him to teach them to pray.

In Jesus' response to their request, we can learn at least two things about prayer.

A.        According to Jesus, it is when prayer is persistent that it is effective.
1.        In this humorous story of a man pounding on his neighbor's door at midnight, Jesus presents prayer as a profound, persistent exercise (vv. 5-8).
2.        Some Christians might seek to use prayer as a substitute for Christian duty and responsibility.

B.        True prayer can be an agonizing work experience.

1.        It is something that pulls out of one's soul the great resources we have and attaches them to the even greater resources of God.
2.        Meaningful prayer expects things of the one praying as well as anticipating things from God.

A.        Effective prayer requires faith that there is someone listening.

1.        I am convinced that some people, even some Christians, do not pray, because they really do not believe anyone is listening.
2.        They see God as distant, aloof, and unconcerned with what is going on in the insignificant little lives of individual people.
3.        The Bible however presents a different picture of God.  He is portrayed as responsive and most interested in what His children have to say.  In comparing the Heavenly Father to their earthly fathers, Jesus asks his disciples, "If you know how to give good gifts to your children, how much more will your Father in heaven give the Holy Spirit to those who ask him?"

B.        Effective prayer requires the kind of faith that can accept God's answer.

2.        Yet, some of us are not so sure of this.  We have prayed for things and not received them, leaving some of us to wonder if God really answers prayer.
3.        However, just because we do not always get what we want in prayer does not mean that our prayers go unanswered.  There are other answers besides "yes".
4.        God said "no" to the prayer of Paul that his "thorn in the flesh" might be removed.  He also said "no" to the prayer of his Son that He be allowed to escape the cross.  Yet God was able to turn those "no's" into even greater, unexpected blessings.
5.        The challenge of prayer is not to demand things of God, but to submit ourselves unto God, not to try to use Him, but to be used of Him.  Our prayers should be consistent with his will.

Here are just a few scriptures that show the power of prayer with faith.

Psalms 4:1, 1Hear me when I call, O God of my righteousness!  You have relived me in my distress; Have mercy on me, and hear my prayer.

Psalms 5:3, 3My voice You shall hear in the morning, O Lord; In the morning I will direct it to You, And I will look up.

Psalms 42:8, The Lord will command His loving kindness in the daytime, And in the night His song shall be with me A prayer to the God of my life.

Mathew 21:21-22, 21So Jesus answered and said to them, "Assuredly, I say to you, if you have faith and do not doubt, you will not only do what was done to the fig tree, but also if you say to this mountain, 'Be removed and be cast into the sea,' it will be done.  22And whatever things you ask in prayer, believing, you will receive."

Mathew 17:20-21, 20So Jesus said to them, "Because of your unbelief; for assuredly, I say to you, if you have faith as a mustard seed, you will say to this mountain, 'Move from here to there,' and it will move; and nothing will be impossible for you.  21However, this kind does not go out except by prayer and fasting."

Mark 11:24, 24Therefore I say to you, whatever things you ask when you pray, believe that you receive them, and you will have them.

Philippians  4:6-7, 6Be anxious for nothing, but in everything by prayer and supplication, with thanksgiving, let your requests be made known to God; 7and the peace of God, which surpasses all understanding, will guard your hearts and minds through Christ Jesus.

Dwight L. Moody once said, "Every great movement of God can be traced to a kneeling figure".

There is no limit to what God can do for an individual Christian or a church, who will exercise this form of disciplined, believing, persistent prayer.  Jesus said, "My house shall be called a house of prayer".  When it is, it will be a house of power.  Prayer is ones communication with Almighty God, it consist of more than requests, as it can also be a form of thanksgiving.  It demonstrates faith more than anything else does.  As a Christian, it is our personal time with our God.  As a Church, it will empower us to do His will and bring Him glory.  In all of our prayers we should remember and practice what Christ instructed us to do in John 14:13-14, 13And whatever you ask in My name, that I will do, that the Father may be glorified in the Son.  14If you ask anything in My name, I will do it.

Almighty God let this teaching touch the hearts of those who receive it, that they may grow in their personal faith, that they may come to know You Father and build their personal relationships with You Father and be empowered to do Your will Father.  You are such a great and awesome God.  You gave us your Inspired Word that we might get to know You Father, but most of all You gave us Your Son as a final sacrifice; the blood to cover our sins.  You are such a loving God and, it is my will to serve you Father, to return the love you have shown upon me.  Use me Father that I may bring You the glory You so richly deserve.  I ask these things Father in the name of my redeemer, your son Jesus Christ.